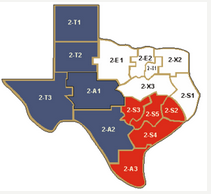 The first meeting convened with 36 delegates and eight alternates. There were 12 original clubs from Texas that joined Lionism when it was officially formed. These were Abilene, Austin, Beaumont, Dallas, Fort Worth, Houston, Paris, Port Arthur, San Antonio, Temple, Waco and Wichita Falls. These clubs are known as the Founder Clubs. October 8, 1917, Texas became District 4.

In 1921 District 4 became District 2 as a result of the International Convention in Oakland, California.